Mashpee Commons has evolved over the years as one of Cape Cod’s premier shopping destinations, with a wide variety of retail and food establishments. But there’s also a bustling energy, an inward attraction there, which has created jobs and municipal income in an area of Cape Cod that was previously lacking.

It’s a major shopping hub of the Upper Cape, with over 100 stores and restaurants and 52 apartments. By taking only a few steps, shoppers can pick up groceries, gifts and specialty goods, all before meeting up with a friend for cocktails.

Its town-center feel attracts those seeking a Sunday stroll, but also the busy business person in need of a trusty place to find a tie. Its old-school architecture is a sendoff to the type of community which houses it – one which pays homage to the past but eagerly seeks a steady economic future.

The types of businesses in Mashpee Commons are diverse and numerous, but we can break them down into the following categories.

Dining and Entertainment. There are nearly twenty options for noshing within the Commons, most of which are local businesses which offer selections for both worldly and home-stuck palates. Diners may choose between pub fare at Bobby Byrnes, French classics at Bleu, Italian fare at Estia or Siena, and sandwiches at Burrito Bistro or Panera. They can also pursue pizza at Zoe’s, smoothies at Organic Market, and a whole host of Asian options at Asia. After dinner, visitors can catch a flick at the Regal Cinemas just steps away.

Clothing. Shoppers have consistently flocked to Mashpee Commons for its wide array of clothing stores. There are over 30, offering the type of diversity you find in the development’s restaurants. Chico’s, Francesca’s, White House|Black Market and Modern Mix offer more contemporary styles and fits, while Puritan, Jos. A. Bank and Soft as a Grape are longtime local favorites. Selections from Vineyard Vines, Cape Kids, MOCEAN, Suits You Swimwear and The Black Dog will let you show off a little homegrown Cape Cod chic.

Specialty Shops. These are your gift shops, home furnishings and gourmet selections. Setting the Space and Williams Sonoma have your living room and kitchen covered. Massage Envy, Beyond Beauty and Polished Nails and Spa provide for various health and wellness needs, and the Spice Merchants, Cape Cod Art Bar, Color Me Mine, Kensington’s and Cape Kaleidoscopes prove that shoppers have no shortage of options available to them in the Commons. If you need any sort of healthy ingredient, be it gluten free, vegan or paleo-friendly, be sure to stop at the Organic Market.

While a shopping center has existed in the area since the 1960s, Mashpee Commons as it is known today has its roots in the mid-80s.
Before developers Douglas Storrs and Arnold Chace began developing a vision for the land in 1986, the existing infrastructure resembled a worn out and under-patronized strip mall.

The developers believed that in order to succeed and create a formal center of town, the shopping center should feature architecture inspired by traditional New England structures and be highly walkable.

They felt a mixed-use model would lend itself to a stronger economic community than a typical sprawling mall. The town-center feel which the Commons remains noted for was achieved by placing parallel parking spots in the busier intersections, creating a buffer between the road and sidewalk and therefore making these areas even more walkable.

In 1962, the former New Seabury mall area was comprised only a few shops. But as the community grew and diversified, so too did its merchants, a trend which continues today. 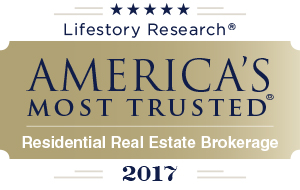 Lifestory Research is pleased to announce the results of the 2017 America's Most Trusted@ Residential Real Estate Brokerage Study in which Sotheby's International Realty ranks highest in trust among residential real estate brokerage brands. Sotheby's  International Realty is a luxury real estate brand founded in 1976 by the Sotheby's Auction House. Sotheby's International Realty operates as a franchise focusing on brokering and marketing of luxury residential real estate. The study, based on 6,299 consumer surveys, tracks how trust impacts the evaluations of residential real estate brokerage brands by home shoppers. Consumer opinions are collected over the course of the prior 12 months throughout the United States. To qualify to participate in the study, participants must have indicated that they were aware of specific brands and actively shopping for a new home. Lifestory Research tracks the largest residential real estate brokerage brands in this ongoing study.The brands included in the ranking list are based upon those brands most recognized by consumers.Some brands included in the study are not represented in the list since they did not generate a brand awareness score high enough to be included.

Trust is measured through the Lifestory Research Net Trust Quotient Score in which each brand is evaluated in regards to trust by those shopping for a new home. An index score of 100 is average for all brands included in the study.

America's Most Trusted@, in its fifth year, is a designation awarded to brands that garner the trust among those they serve. Awards are based upon the collection and evaluation of thousands of consumer opinions. Product categories included in the 2017 research program include: home builders, active adult resort home builders, faucets, HVAC systems, kitchen appliance brands, laundry appliance brands, paint, and residential real estate brokerages. Trust is measured through a

Net Trust Quotient Score in which brands are divided into three categories: "advocates," customers who feel a significant trust toward the brand; "neutrals," those who trust a specific brand, but do not see a specific brand as standing on the shoulders of other brands, and "antagonists," who are skeptics with little, if any, trust in a specific brand.

Detailed information about the study can be found at: www.lifestoryresearch.com/most-trusted/ 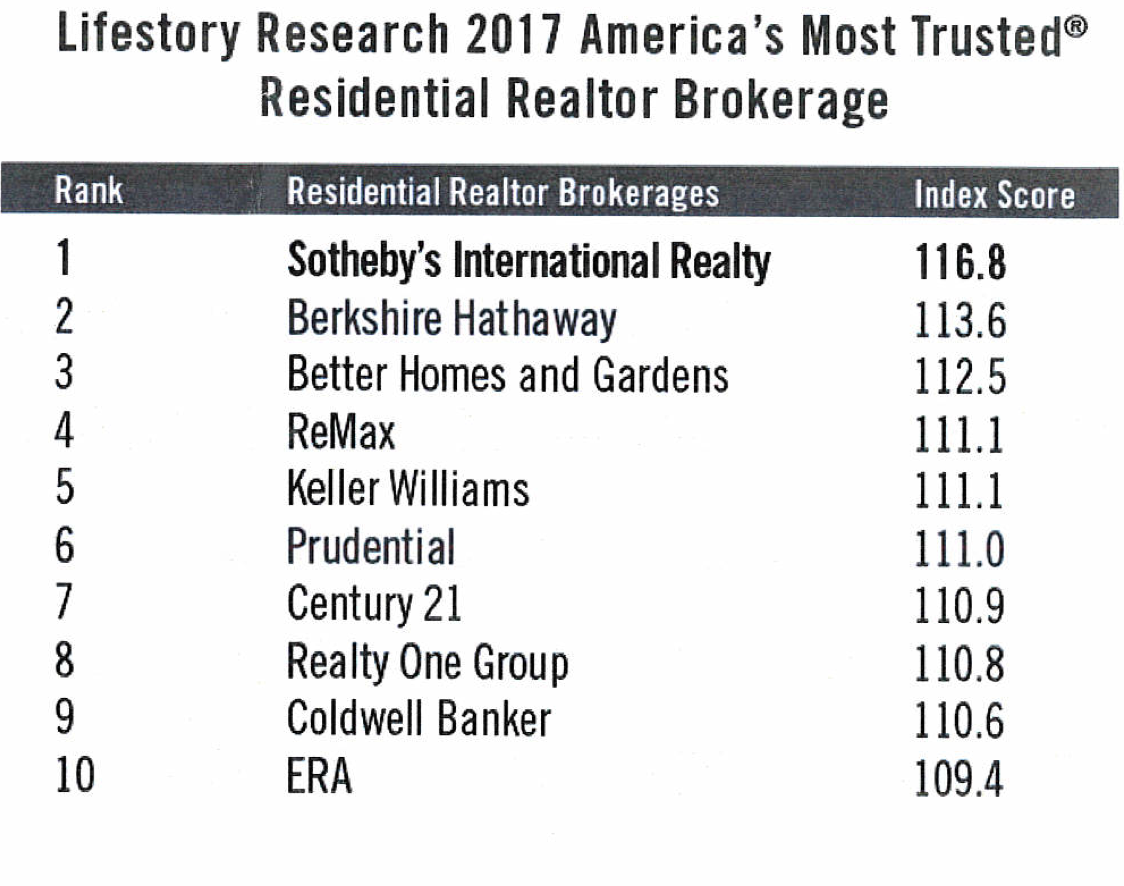